A hike through Bwindi Impenetrable Forest takes you very close to the rare and endangered mountain gorilla population. 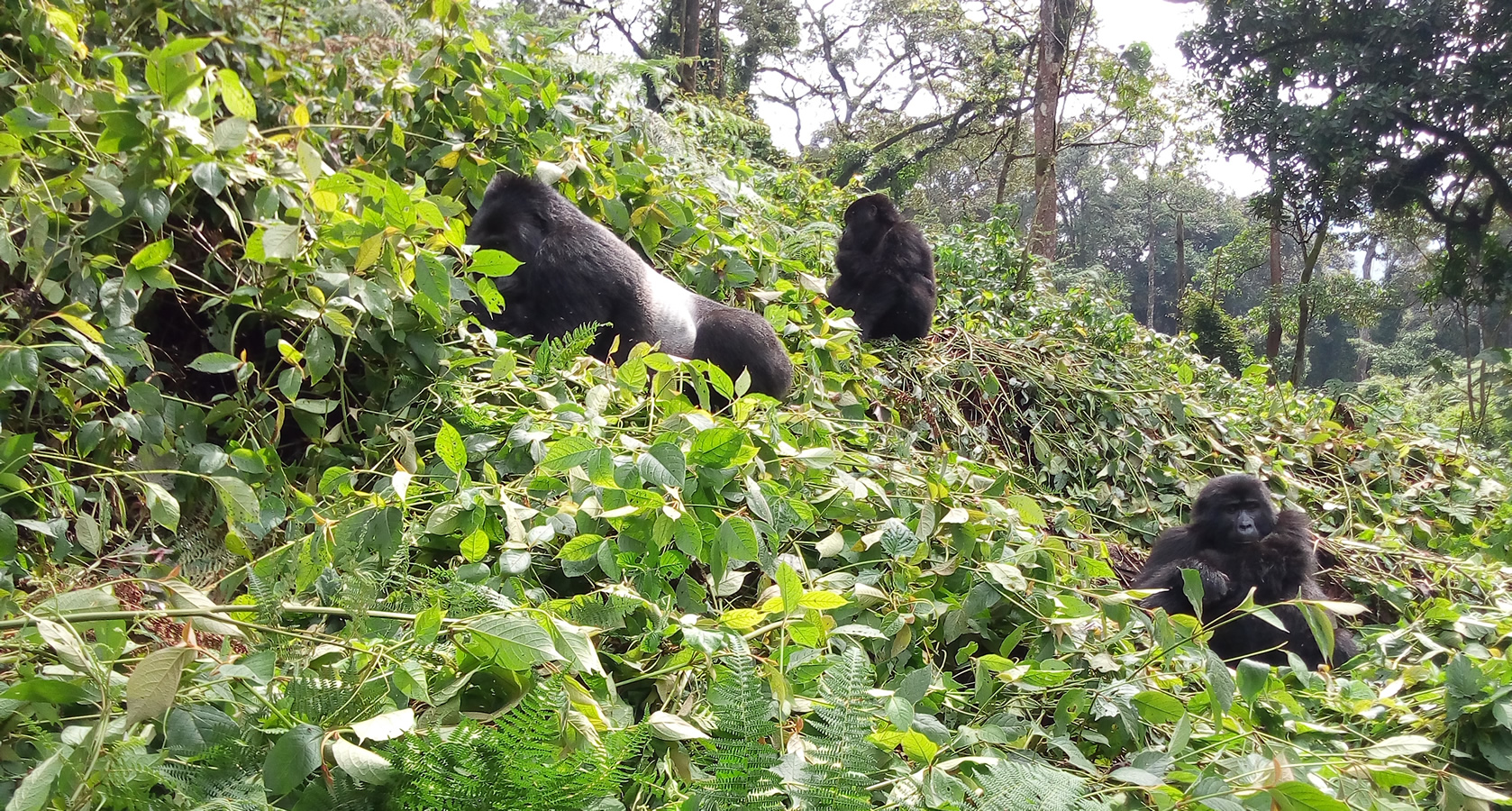 It was 10:30 a.m. and, we’d been climbing almost straight up the side of a rain-forested mountain in Bwindi Forest for around 3 hours. We were a group of seven trekkers some of us hired porters to help carry things, a guide, a guy with a machete to clear the path, and two armed guards both with AK47 for just in case of “aggressive jungle elephants. After a tiresome hike of about 3 hours in a think forest the guide stopped us, in the exhausted hush, the guide let out a low, grumbling groan. Seconds after the fact, that moan was loudly returned.

“It’s the gorilla call from the trackers,” he said. “We’re drawing near now. Just around 100 more yards.” The trackers had been out since dawn, after ways of crushed foliage indicating the movement of mountain gorillas. The groaning communication was intended to stay in touch without the radios, telling us where to go without scaring the gorillas.

They were at our objective: a clearing in the jungle where we’d find the Bitukura gorilla group, with 13 individuals strong, relaxing between their daily movements and searching for food. We’d get an hour in the presence of these amazing animals to take pictures and observe them as they do their daily activities as the young ones play with each other, then we’d hike back to our starting point to meet the cars to go back to the national park headquarter to get our gorilla tracking certificates. 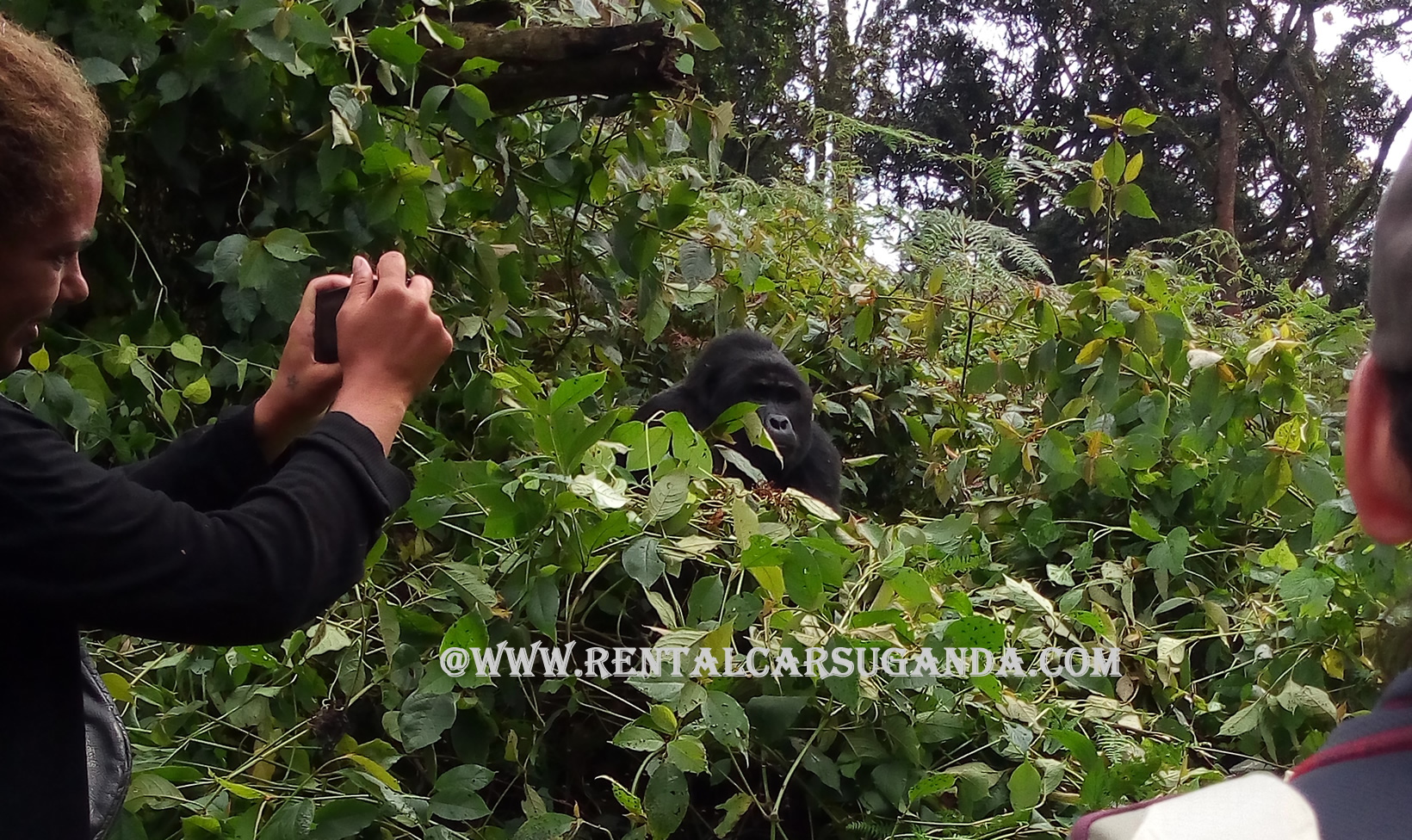 Mountain gorillas can only be found in 3 countries in the world; Uganda, Rwanda, and the Democratic Republic of Congo (DRC), and just in two forest—Bwindi, where we were, and the Virunga range of wiped out volcanoes which comprised of Virunga National Park in DRC, Volcanoes National Park in Rwanda and Mgahinga National Park in Uganda. The mountain gorilla population is critically endangered; just around 900 still survive in the world. The eastern gorilla subspecies was first found in 1902 and very quickly turned into the main aim for poachers who needed to sell their meat and fur. Due to deforestation, disease, and poaching, the gorilla population reduced but when conservationists turned up to protect the remaining population of mountain gorillas in Africa, now the number is increasing, thanks also to some degree to these gorilla treks, which started in the late 90s as a source of sustainable tourism.

My porter was stressed over me. I’d been struggling for the most recent hour to climb the steep, freshly cut path at around 7,000 feet elevation, and now that we were for the most part there I didn’t know whether I’d make it. He and alternate porters were important to the hike, carrying all our sacks, pulling us up one by one from sloppy edge to sloppy edge, and ensuring we safely made it through the trek. It’s not a stretch to state that without my porter, I wouldn’t have made all the way to mountain gorillas. 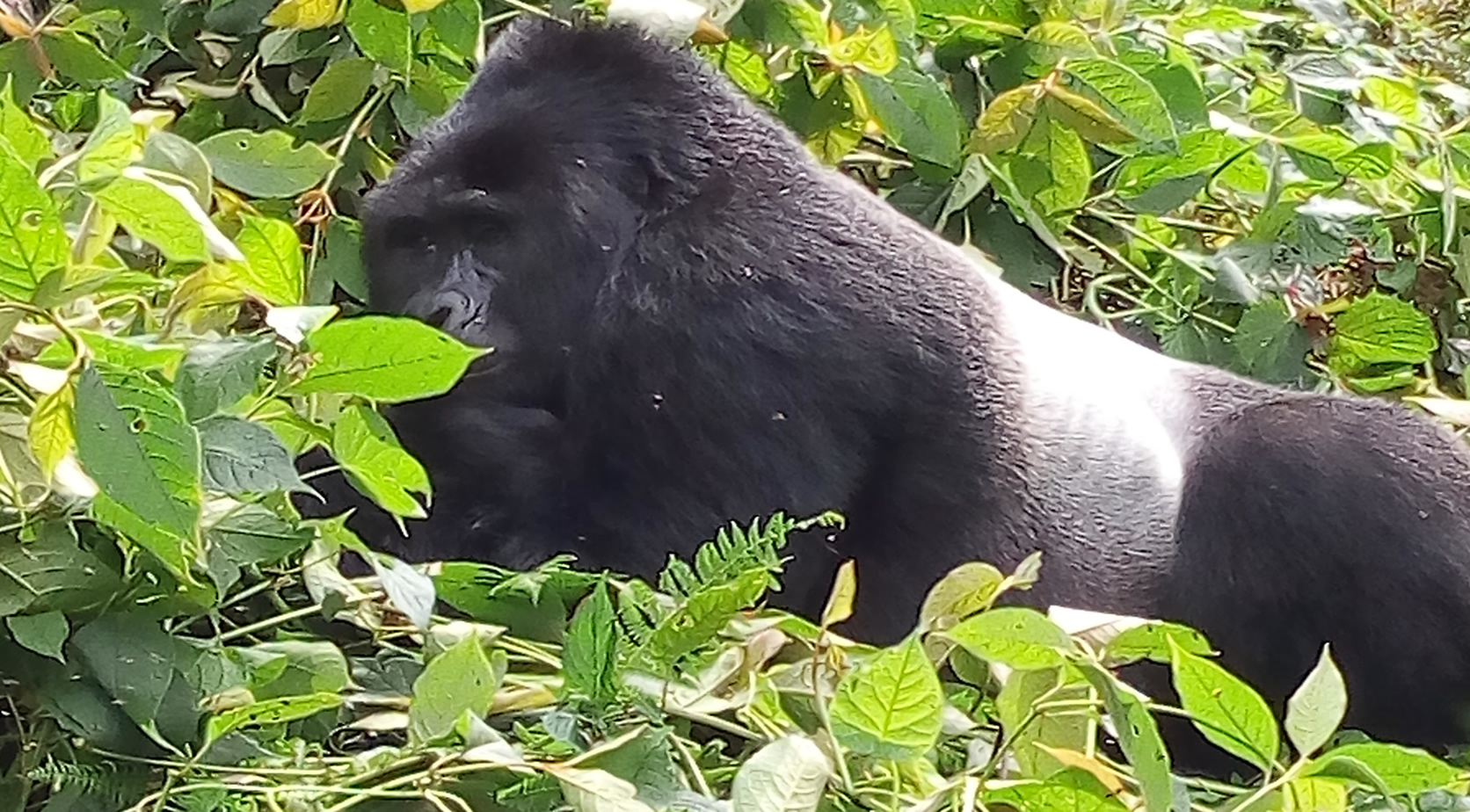 The porter themselves are a part of the sustainable tourism effort to gorilla trekking. Mr. David our driver/guide from privately operated tour and travel company – African Jungle Adventures Ltd, revealed to us that most of the porters are poachers who understood their former income source would become scarce if the population kept on dwindles. So the park offered them more money as porters than they’d make in poaching—and now they’re active members in mountain gorilla conservation. Mr. David also said these former poachers are also helping authorities by reporting the other poachers to stop the act before taking place.

I got some time and asked our guide whether it’s possible to visit the park on self-drive, Mr. David was honest enough and told us it’s possible and easy, that you just need to hire a car in Kampala from the many car rental companies like 4×4 Uganda, Self-drive Uganda and other and then book the gorilla trekking permits from Uganda Wildlife Offices in Kampala and then drive to the national park on the day for gorilla trekking, and I found it interesting to be under the steering wheel exploring this amazing country at your own pace.

Around 90 meters we met the trackers, a young fellow, and a lady, with machetes, who instructed us to leave our bags and follow them around a few meters from there to the gorillas’ doorstep. It was just around 20 yards until the point when we were flanked: one male gorilla (silverback) on the side, sitting in a swarm of bugs and chomping on some leaves, and a female on the other hand on a tree, watching. Somewhat further in and we saw a baby gorilla playing with her mom. Her name was Gift, was named so on the grounds that the first child of the mother gorilla had passed on, and Gift survived. On our opposite side, the prevailing silverback sat in another place, eating leaves and ceaselessly passing gas. 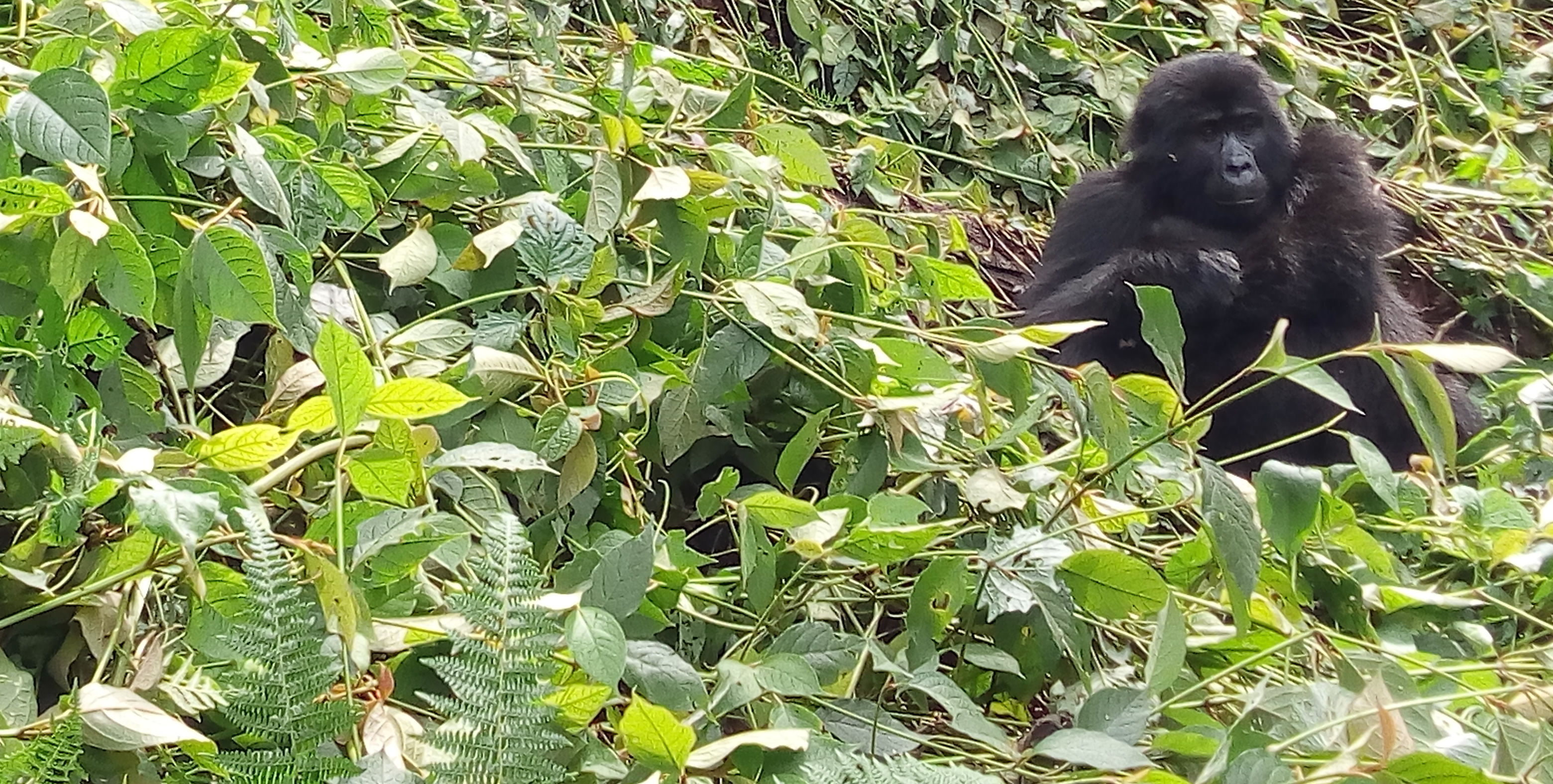 All told, we saw nine of the 13 gorilla individuals in the Bitukura group. Also, despite the fact that we were altogether enchanted watching Gift tumble off her mom’s back just to get scooped move down into her warm embrace, or seeing the male silverback flip topsy turvy to gaze at us from another angle, it didn’t seem to mind one bit that we were there. It’s a part of the sustainable tourism process too—this gorilla family is one of the select families habituated to human nearness, so they don’t run off when guests show up. (Other gorilla groups are left totally wild.) As Jackson stated, “people are simply part of their view.” The habituation enables visitors to keep on coming to see the gorillas, which brings money into the community; the gorilla permit and all costs for the guides and porters go appropriate back to local people working those jobs.

The one hour we had to spend in the mountain gorilla house went too quickly. Gratefully we didn’t go back the way we came—an additional 2 hours down a similarly steep slope would have been much so tough, and much of our hike up was simply searching for the gorillas. Returning to the starting point was a bit easy and in just 40 minutes we were at the starting point, where the driver was waiting to hear about our experience with the mountain gorillas.