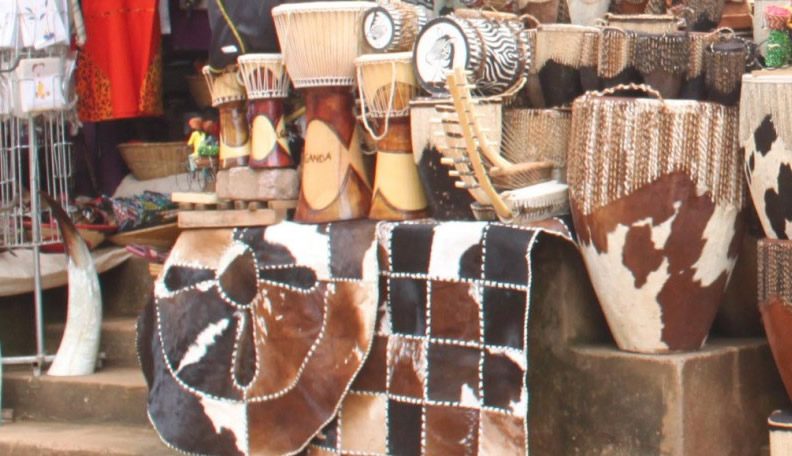 Uganda is a typical African boiling pot due to the numerous cultures that represent the difference in the tribes. Arts and Crafts are an integral part of the cultures and traditions of the people in Uganda from where inspirations to the history and environments are derived because they determine the crafts used by a particular tribe (culture).
When you visit Uganda, you will notice that the arts and crafts represent the strong ethnic background and setting and you will be able to spot the difference between crafts made from various traditional societies but also tell the similarities among a number of crafts from the same ethnic groups in Uganda. The exceptional traditional cultural practices in the different ethnic groups therefore have an influence on the crafts used. Not only that, Arts and Crafts are a result of the feelings of the people responding to different historical events and influences as well as the environment in the most spontaneous manner.

You will agree that art is also the creation of works of beauty through the application of intricate skills that result from the knowledge and regular practice while the craft is usually taken as an occupation by most people. Much as there are differences that are clear, especially as regards functions and designs, there are qualities that bind crafts together.

Craftsmanship skills and innovations are hereditary, thus can be passed from one generation to another with crafts including backcloth, basketry, woven cloths, blacksmith ironworks, woodcarvings, stools as well as mats among others. These crafts show the deep ethnic background and setting thus someone can tell the difference between crafts made from varying traditional societies but also the similarities among different crafts from Ugandans ethnic groups. The extraordinary traditional cultural practices account for the differences on the different crafts.

According to Ethnologists, some of the crafts such as multi-headed spears are in one way or the other connected to traditional rituals or ceremonies or even magical-religious practices. There are also multi-mouthed pots that were used to offer the victims of the King’s wrath poisoned beer as a punishment. When you travel North-wards to the Luo people and east-wards to the Basamya and Bagwere, the two-mouthed pots are used in some important rituals such as the birth of twins and during initiation ceremonies.

Much as some of the differences are common concerning their physical designs and functionality, traditional crafts are bound together by some few qualities thus need to analyze the different techniques used in making the craftworks by the various regions. For instance, the bigger Teso field and storage baskets used are made from heavy yet wick materials bound together. These baskets are however common in different regions like Acholi, Bunyoro, and Busoga among others.

In most cases, the making of handicrafts including musical instruments are done by men and the use and manipulation of these instruments like fiddles and drums were meant for men alone but this has continuously changed due to the external influences and introduction of single-sex schools thus allowing them to fully participate in playing different musical instruments. Basketry is an important foundation for homemaking and construction of poultry pens, fences, houses, stockades, enclosures, and making traps for wild animals in addition to other items such as mats, gift baskets, handbags, tablemats, hats, ornament baskets, flat trays, wall hangings and baskets with most of them coming from different regions like Bunyoro, Buganda, Kigezi and Toro.

Not only that, backcloth making and related crafts are very important among the Bantu regions and are made from Natalansis tree (Omutuba) and the process also involves using heavily made groove mallets making it thinner and larger. These things are traditionally used as clothing, burial shrouds and beddings but also as carpets for Palace floors for Kings in Bunyoro, Toro and Buganda. This was however replaced by different clothing materials such as woolen carpets, tablemats, cushion covers, shoulder bags, handbags and briefcases among others.